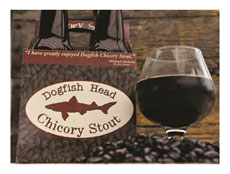 The beer, which the brewery has been making almost as long its been in business, is a nod to Dogfish founder Sam Calagione’s urge to experiment. Calagione would wander into his brewpub kitchen looking for ingredients to spice up the monotony of every-day brew sessions. One day, Calagione experimented with coffee, roasted chicory, St. John’s Wort and licorice root and Chicory Stout was born.

This November release checks in at 5.2 percent and has a suggested retail price of $8.50 per 4-pack. It will be available in all states Dogfish Head products are currently sold except Texas

Below is the official company press release.

MILTON, DE – Back in 1995, when Sam Calagione had little more than a dream and a glorified homebrew rig, he had to brew two or three 10-gallon batches of beer a day to supply Dogfish Head Brewings & Eats.

It was a blessing in disguise. Brewing the same styles of beer all day every day got pretty boring. Because the batches were small, Sam could afford to indulge his off-centered whims. He’d wander into the brewpub’s kitchen and grab a handful of raisins, a cup of maple syrup or a few scoops of coffee.

One of the beers born in those early days was Chicory Stout, brewed with organic Mexican coffee, St. John’s Wort, licorice root and roasted chicory.

“This is one of the oldest recipes that we do at Dogfish Head,” Sam says. “It’s a really roasty, chocolatey, mellow session stout.”

Clocking in at a not-too-boozy 5.2% ABV, Chicory is a fantastic food beer. It pairs perfectly with grilled chicken, smoked fish, barbecue and rich chocolates like those from our friends at Askinosie Chocolate in Springfield, Mo.

This winter seasonal is released once a year in November throughout Dogfish Head’s distribution network. To find it near you, visit our Fish Finder and punch in your ZIP code.