Laguna Beach Beer Company (LBBC) has once again proven to be at the forefront of the most discerning beer lover’s radars with its highly esteemed new Head Brewer and latest launches. This Orange County institution has been brewing local favorites since 2014 and boasts two locations: the Rancho Santa Margarita brewery and the namesake Laguna Beach tasting room. On Wednesday, February 19, 2020 at the RSM brewery, all are welcome to come and taste six new brews to cure the wintertime blues, all created by the Chris Linn, Laguna Beach Beer Company’s newly named Head Brewer.

Hailing from Long Beach’s Beachwood Brewing, Chris Linn, a longtime Laguna resident, hopes to give LBBC’s fans and
consumers an even more balanced and diverse list of beers. “The biggest thing I hope to bring to LBBC is a more
modern West Coast IPA. Coming from Beachwood, they are famous for having some of the best IPAs on the market, so
I am striving to put LBBC on the map with some amazing IPAs,” says Chris. “I am honored to be appointed the new
Head Brewer of Laguna Beach Beer Company. I feel as if a beer is never perfect and you always need to be on top of
current research and trends in order to put out the best beer you can.”

The tasting party will begin at 6 p.m. at LBBC’s Rancho Santa Margarita brewery location (29851 Aventura, Ste C-E,
Rancho Santa Margarita, CA 92688) and is open to the public. All who join in the festivities will have the opportunity to
sample and purchase all six freshly brewed beers from Laguna Beach Beer Company’s new Head Brewer, Chris Linn
(while supplies last): Wilderness Park Porter (Coffee Porter feat. Portola Coffee), Luge Hoppy Lager, Old Emerald
Double IPA, Greeter's Pale Ale, Thousand Steps West Coast IPA, and Greeno Hoppy Pale Ale. All are invited to meet
Chris, learn more about his vision, and experience a tour of the brewery. Pints will be available to purchase for $6.

If you have questions or would like more information, please contact Mia Raines at (626) 644-2848 or email
Mia@CoastalCreativeServices.com . 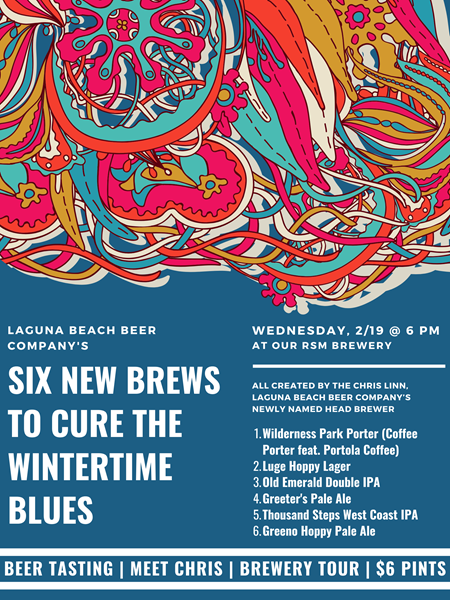