Join us in Milton on Saturday, April 13 at 11 a.m. for the release of Raison Brett'ra.

Music has been a part of Dogfish Head since before Dogfish Head. So it’s a natural fit for a brewery that makes ‘Analog Beer for the Digital Age’ to be the Official Beer of Record Store Day! A celebration of the unique culture of record stores and the special role they play in their communities, we’re getting in on the fun with the release of Raison Brett'ra!

What better way to celebrate independent beer and independent music this Record Store Day than with the release of a brand new brew?! Join us at our Milton Tasting Room & Kitchen on Saturday, April 13 at 11 a.m. for the release of yet another beer out of our 'Wooden ... it be nice!' wild beer program – Raison Brett'ra.

A barrel-aged, Belgian-style dubbel, Raison Brett'ra was brewed as a dark sour ale base. After being fermented with Brettanomyces Drei and Brettanomyces Brux, it was aged for seven months in used bourbon barrels and finished with hand-picked green Timpson Californian raisins. Bottle conditioned for a bright and effervesent carbonation, Raison Brett'ra clocks in at 7.3% ABV. Hand-bottled – cork and cage style – and hand-painted with a special stripe signifying its uniquely-crafted touch, there's 2,400 (375ml) bottles of this limited-edition beer up for grabs and they're priced at just $10 each!

But that's not all, folks! We're keeping the Record Store Day celebration rolling all day long with a slew of awesome giveaways ... including copies of the Grateful Dead's new Record Store Day release, Sage and Spirit. We'll also have a DJ spinning a mix of classic vinyl melodies from 1-4 p.m. Don't miss out! 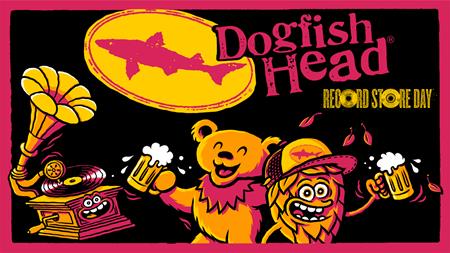