A new kind of craft beer fest for Philadelphia!

Philadelphia, PA June 4th, 2019 -- Philadelphia has a new beer festival that focuses on some of the craftiest breweries in the country! Double Nickel Brewing Co. is slated to host Fourth & Friends Craft Beer Festival in partnership with Hop Culture Magazine and CollaborAid on Saturday, July 6th, from 1-5pm at Uptown Beer Garden, 1735 Market Street, Philadelphia, PA 19103. The festival will feature a total of 23 breweries and cideries from around the country in addition local food vendors and music curated by Hoof Hearted Brewing’s resident artist, and Philly native, Thom Lessner.

Fourth & Friends Craft Beer Festival is an opportunity to showcase the craft beer community and bring together makers and drinkers in the City of Brotherly Love. Instead of distributors or volunteers, pours will be distributed by brewers or brewery owners, who will be on hand to represent and talk about their products.

Proceeds from the event will benefit CollaborAid, a not-for-profit organization that turns creativity and collaboration into support for local families struggling to put food on the table.

General Admission Tickets ($60) include access to the festival, a festival-exclusive tasting glass, and unlimited sample pours from all breweries and cideries. Tickets are available for purchase online through Eventbrite. Designated driver tickets ($20) are also available, and “Late Bloomer” ($65) tickets begin June 29th through July 6th. 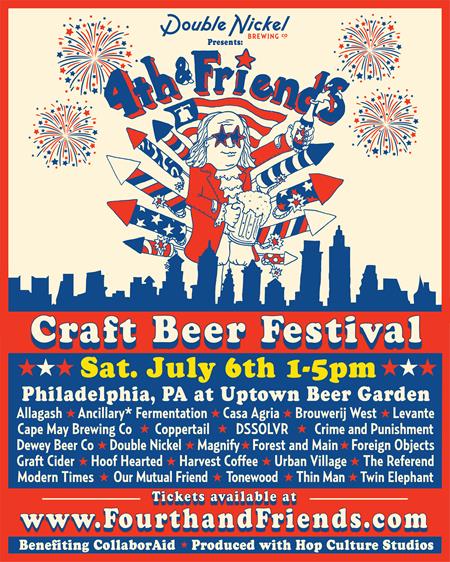 Ticket Price/Policy:
Find out more info and get your tickets at www.fourthandfriends.com