Stop by on Saturday, May 25 at 11 a.m. for the release of Ouvert Operation and Hordeum Vulgarity.

We’re comin’ atcha with a double whammy of a bottle release this Memorial Day weekend!

Stop by our Milton Tasting Room & Kitchen on Saturday, May 25 at 11 a.m. for the release of not one, but two limited-edition beers – Ouvert Operation AND Hordeum Vulgarity.

Another beer from our ‘Wooden … it be nice!’ wild beer program, Ouvert Operation was brewed as a blonde ale with Himalayan peppercorns. It was then open-fermented with a Saison yeast and aged in used gin barrels with Brettanomyces Drei and Brettanomyces Claussenii for six months. The result is a pale straw colored brew with aromas of gin botanicals and grapefruit, and flavors of juniper, peppercorns, blood orange and grapefruit peel. Clocking in at 8.7% ABV, Ouvert Operation was bottle conditioned for a bright and effervescent carbonation – a great beer for aging or enjoying now!

Hand-bottled – cork and cage style – and hand-painted with a special stripe signifying its uniquely-crafted touch, there’s 2,000 (375ml) bottles of Ouvert Operation up for grabs, and they’re priced at just $10 each. No bottle limit.

Releasing that same day is Hordeum Vulgarity, a rich English barleywine. Weighing in at 13.2% ABV, Hordeum Vulgarity was brewed with British Marris Otter malts and East Kent Goldings Hops. It was then aged in barrels that once held Dogfish Head Distilling Co. Esprit Malade. We’ve only got 275 (750ml) bottles of tasty tipple … so you best get here early to get yours! Bottles are priced at $25 each. Limited to two bottles per person. 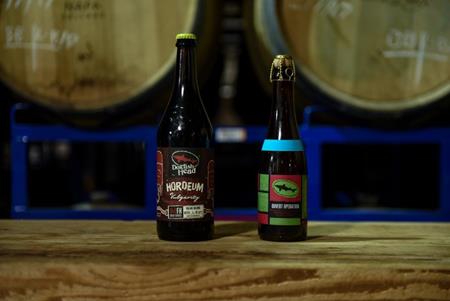