Join Bryan & Josh at Chesapeake & Maine on Nov. 14 for a night of craft beer & culinary excellence!

For today’s craft beer drinker, the expansive universe of beer is evolving at lightning speed! Like trends of any kind, it’s one day you’re in and the next day, you’re out.

The world of craft beer used to be all about high-ABV brews, 750ml bottles and aggressively hoppy IPAs. Who cares about calories? Cans—meh. Light beers…no thank you! But now, craft beer lovers are actively seeking low-calorie and canned options. They’ve got the CRAZE-ies for those hazy IPAs! And they love sours—the more mouth-puckering the better! With time, consumers’ tastes and preferences have, and will, continue to change. In response, brewers must push the boundaries on aroma, taste and ingredients to try and remain relevant.

Join Dogfish Head Brewing Ambassador Bryan Selders and our pal Joshua M. Bernstein, one of America’s foremost beer journalists, at Dogfish Head’s Chesapeake & Maine on Thursday, Nov. 14, for a night of craft beer and culinary excellence. Throughout the evening, Bryan and Josh will chat about the evolution of craft beer, speaking in-depth about various industry trends, as they guide guests through an unforgettable five-course sensory experience. Each of the five small plates served will be thoughtfully paired with a deliciously off-centered ale, and each pairing will bring to life a topic for tasty discussion. Josh will also share points from his new book, Drink Better Beer, as Bryan discusses Dogfish Head’s place in the current craft beer landscape and explains how consumers’ ever-changing preferences affect Dogfish Head's off-centered ales.

Tickets are just $50 per person and include five small plates, five preselected beer pairings, one beer-cocktail pairing AND a copy of Josh’s book Drink Better Beer. To get your tickets, click HERE - https://chesapeakeandmaine.ticketleap.com/drink-better-beer-and-eat-with-bryan--josh/

Course 1
Buffalo Monkfish Bites with diced celery and house ranch
Pairing #1 - 90 Minute IPA - Our most critically-acclaimed beer and one of America's first Imperial IPAs. This continually hopped Imperial IPA has a powerful malt backbone and pungent, but not crushing'y bitter, hop flavor. - 9.0% ABV
Pairing #2 - Horkin' Heapload - This imperial IPA was brewed with Delaware-grown barley malt and flaked corn. Atop its base of soft, pillowy malt are massive amounts of fragrant, American hops for resinous, citrusy, piney and tropical sensations in every sip. To make this Dogfish Head Brewpub exclusive, we needed a whole lot of everything ... you might say a Horkin' Heapload. - 8.3% ABV

Course 4
Wild Maine Blueberry Cobbler with house-churned vanilla ice cream
Pairing - Right Loose - In the recesses of our brewery lies the Sour Patch, where we cultivate our "Wooden... it be Nice" series. It's a brewer's playground for experimenting with wild yeasts, barrel aging and the infusion of culinary ingredients. Right Loose is a blend of a dark and a blond base beer that's fermented with Brettanomyces & Lactobacillus, and aged for 12 months in used red and white wine barrels. Finished with heaps of wild Maine low-bush blueberries, it is then bottle conditioned for a bright and effervescent carbonation. - 7.2% ABV

ABOUT THE BOOK:
The universe of beer is expanding fast. Suddenly there’s CBD beer, beer-wine mashups, and beer-in-a-box that’s sold uncarbonated. Brewers large and small are pushing boundaries on aroma, taste, and ingredients, while beer retailers are blurring the lines between store and bar. A second beer revolution—close on the heels of the craft beer boom—is underway, and the average beer lover is at risk of getting left behind. Thankfully, acclaimed beer authority Joshua M. Bernstein and a slew of other industry experts such as brewers, bar owners, and Master Cicerones are here to help. In Drink Better Beer, Bernstein has culled the wisdom of more than 100 beer professionals, and takes the mystery out of an increasingly complicated universe of beer. With sage advice on buying, storing, and pouring your beer, Bernstein helps you take your hops knowledge to the next level. There is guidance on how to smell, taste, and select the right glass for your beer, as well as tips on spotting bars or stores that are treating their beer wrong. Learn how to expertly pair beer with food and why beer should be drunk soon after you buy it. With Bernstein’s help, you’ll soon be able to order smarter and enjoy your pour even more.

ABOUT THE AUTHOR:
Joshua M. Bernstein is one of America’s foremost beer, spirits, food, and travel journalists and the author of five books: Brewed Awakening, The Complete Beer Course, Complete IPA, Homebrew World, and the recently released Drink Better Beer (all Sterling Epicure). His work appears regularly in newspapers, magazines, and websites, including The New York Times, New York magazine, Men’s Journal, Bon Appétit, Wine Enthusiast, and Imbibe, where he oversees beer coverage as contributing editor. Beer Sessions Radio, CNBC, Fox Business, and NPR’s Marketplace have featured him as a beer expert, and he consults for breweries, bars, and bottle shops and leads private tasting seminars and tours. He lives with his wife and daughter in Brooklyn. 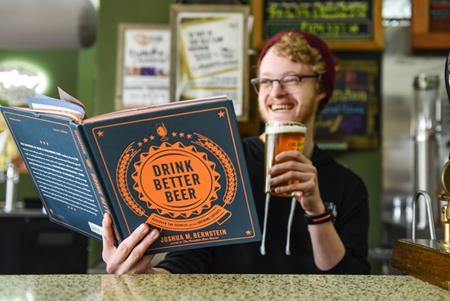