Home » Beer Events » Dogfish Head In & Of Itself Bottle Release

Stop by our Milton Tasting Room & Kitchen on Saturday, June 15 at 11 a.m. for the release of In & Of Itself, the newest brew out of our ‘Wooden … it be nice!’ wild beer program.

Brewed as a rustic Farmhouse base, In & Of Itself was fermented with Brettanomyces and Lactobacillus. After being aged in red and white wine barrels for nine months, this ruby red-colored beer was finished with Etrog, Buddha’s hand and more than two pounds of raspberries per gallon. Bursting with aromas of raspberry pie, it boasts tart, sweet and sour flavors of raspberry, as well as notes of bright citrus and a champagne-like finish.

Clocking in at 7.4% ABV, In & Of Itself was bottle conditioned for a bright and effervescent carbonation. Hand-bottled – cork and cage style – and hand-painted with a special stripe signifying its uniquely-crafted touch, there’s 5,000 (375ml) bottles of In & Of Itself up for grabs, and they’re priced at just $10 each. No bottle limit.

But that’s not all, folks! To pair with your bottles of In & Of Itself, we’ve got a special piece of glassware! Priced at $6 each, these Dogfish Head-branded, shaped pint glasses are adorned with blue and yellow images raspberries and citrus … the perfect glass from which to enjoy a pint of In & Of Itself! 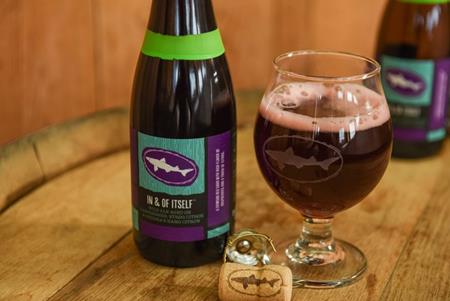