It's going to be the collab of all collabs: COLLABOSAURUS IPA by Grand Teton, Hidden Mother & BBBC

It's going to be the collab of all collabs: COLLABOSAURUS IPA.

Come thirsty and bring your creative prowess, because it wouldn’t be “The collab of all collabs” if we didn’t have YOU join in, too!

How do you get crowned the best colorer, you may ask?

Well, turn in your coloring sheet to one of the BBBC bartenders in the taproom at the release party or slide into our DMs… ??

You have until the stroke of midnight on 7/22 to submit your entry.

On Tuesday, 7/23 - the fine folks at GT, HM, and BBBC will vote and announce the winner via Instagram! 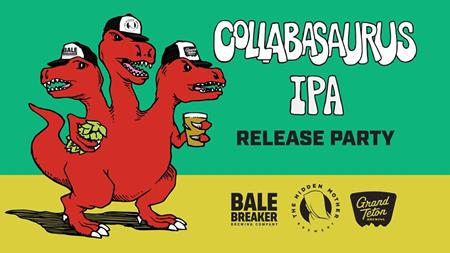