This literary-inspired fundraiser beer was crafted as Catawba's tribute to A Confederacy of Dunces.

It’s been called a classic of satirical literature, “a gargantuan tumultuous human tragicomedy,” “one of the funniest books ever written,” and a Pulitzer Prize winner. Although we’ve yet to see a Pulitzer Prize for beer, we can appreciate Toole’s masterwork for its deep-seated roots in the American South, and its timeless quality that only improves with each passing decade. And perhaps most of all, we admire its dedicated pursuit of greatness without taking itself too seriously in the process.

Now in our 20th year as a brewery, Catawba is honored to release our first ever literary-inspired beer as a tribute to the 100th anniversary of Asheville’s Pack Memorial Free Public Library!

A mouthful in itself just to say, Ignatius J. Reilly’s Jelly Donut Brown Ale was concocted with the legendary sweet tooth of Toole’s protagonist firmly in mind. Our robust Brown Ale was injected with a cartful of tart Michigan cherries, dosed with milk sugar, glazed with vanilla bean, and finished with a sprinkle of cacao from French Broad Chocolates – yes, a celebration of delicious excess. The result is a decadent jelly-filled donut in liquid form that’s easy to imagine as an object of Ignatius’s insatiable obsession. The beer weighs in at 6.3% ABV as an homage to the year the novel was written (1963), beginning its infamous 17-year journey to publication.

Availability: Draft-only at Catawba’s four tasting rooms while supplies last. Also find it at The Whale in West Asheville as part of their "Biblio-brew" tap takeover event on Sunday, July 28th.

Fundraiser: $1 per pour of Jelly Donut Brown Ale sold in Asheville will be donated to Buncombe County Friends of the Library. The fundraiser is part of the Pack Memorial Library's 100-year anniversary celebration. 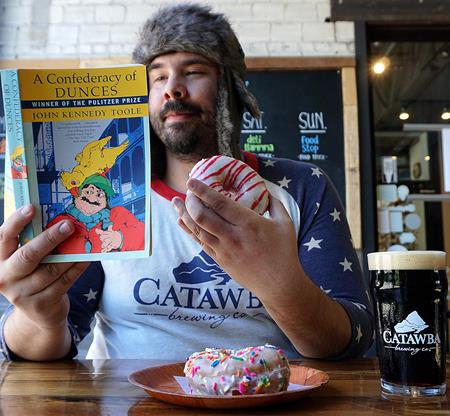