This refreshing session beer draws inspiration from the traditional working class ales of Southern Belgium during the late 19th century. Brewed with a generous portion of flaked wheat, the beer showcases the fruity esters of its farmhouse ale yeast strain, amplified by the addition of fresh South Carolina peaches during secondary fermentation.

As a beer style, the Grisette was relatively unknown until its revival by American craft breweries in recent years. Traditionally, Grisettes were favored by coal and stone miners of Wallonia, whereas the more ubiquitous Saisons were popularized by farm workers in Northern Belgium. The two beer styles are similar in character, with Grisettes typically being a bit lower in alcohol and lighter in body, without sacrificing flavor.

Peach of Mind reinterprets this classic style, while also faithfully honoring Belgian tradition of infusing beer with local flavor. The result is a thirst-quenching golden ale that captures the sweet, juicy essence of a peach in liquid form. 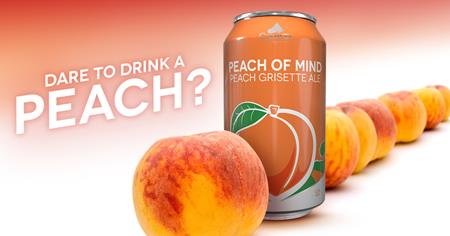