We're hosting an epic second one-year anniversary party in light of our return to Austin! Join us!

Celis Brewery has officially been back in Austin for a year, and we want you to help us celebrate! Join us on July 11th (Seven Eleven) at our brewery for festivities. We'll have six limited-edition beers on tap that you won't want to miss (Dubbel Coffee Porter, November 2017 Grand Cru, Pineapple Grandis Maximus Hazy IPA, Celis Golden Lager, & Raspberry Nitro). To mix things up, we’ll also serve an array of delicious blended Celis brews at our blending station, including Berry White, Cru Berry, Citra Berry, Citrus Mistress, White Lightening, and Snozzberry. Food and treats will be provided by Cluck-N-Burger food truck, Morning Glory Baking Co., and Southern Bunny Shaved Ice. Bites will include smoked wings, gourmet burgers, veggie options, sno cones, cookies, and more. We’ll also be giving away some hip Celis swag, featuring fun items like a tees, totes, and special anniversary glassware. A live band hits the stage inside the taproom at 6pm and a live DJ (DJAQ) will be jamming with the folks outside from 6-10pm. Guests can also have fun creating at our tie dye station. Austin Tie Dye Company will be on hand to walk attendees through dyeing a Celis logo shirt as a fun and memorable take-home tee souvenir. Bring your kids, bring your dogs, bring your neighbors, the more the merrier! We want everyone to be safe, so we've paired up with Lyft. Use the code CELISTURNSONE to get 25% of a ride. Come out and cheers to one year with us on July 11th! 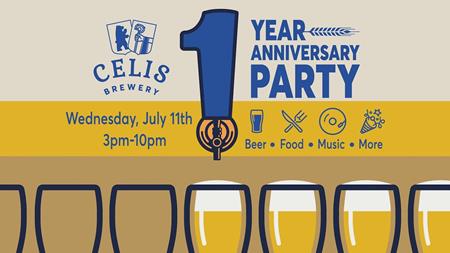