Tickets are now available for the Nature’s Craft beer dinner, presented by The Admiral, The Bull & Beggar, and Catawba Brewing. This exclusive event will be held on Tuesday, November 13, starting at 5:30pm in Catawba’s Asheville South Slope brewery. Proceeds from the dinner will benefit The Center for Craft.

Guests will be seated in Catawba’s private Rickhouse Bar, where they will enjoy a collaborative 5-course food and beer pairing. Chef Richard Neal (The Admiral) and Chef Matt Dawes (The Bull & Beggar) have curated a special menu that focuses on forest and field, celebrating the heritage of Asheville’s wild foraged food. Each course is expertly paired with a Catawba Small Batch Beer.

Tickets are $65 per person. Purchase in advance:

About The Center for Craft
Founded in 1996, The Center for Craft is a national non-profit organization dedicated to advancing the field of craft through fostering new ideas, funding craft scholarship, and backing the next generation of makers, curators, and critics. The Center has developed a strong national reputation as a resource for artists, museums, academic researchers, university students, and arts organizations. Each year, The Center administers over a quarter million dollars in grants to those working in the craft field. Learn more at: www.centerforcraft.org

About The Admiral
In 2007, The Admiral aspired to create an unexpected restaurant that thrived on its talent and creativity. With the procurement of a modest cinderblock building on the wage earning side of town in West Asheville, they succeeded in their goal – to serve an inventive cuisine without having to hold on to convention, all in an atmosphere that lacks the restraints of standard technique. Learn more at www.theadmiralasheville.com

About Catawba Brewing
Catawba Brewing Co. has been an industry leader in Western North Carolina’s craft beer scene for nearly two decades. The company was founded in 1999 by WNC natives, the Pyatt family, who were inspired by their weekend homebrew hobby. From humble beginnings, the business has grown exponentially to become a major craft beer supplier across five states. Catawba now operates breweries and tasting rooms in three NC cities – Morganton, Asheville, and Charlotte – embracing a hybrid wholesale/retail strategy. With the 2018 acquisition of Palmetto Brewing Co. in Charleston, SC, the Pyatt family hobby has spawned one of the Southeast’s largest and most diverse craft brewing entities. Learn more at www.catawbabrewing.com 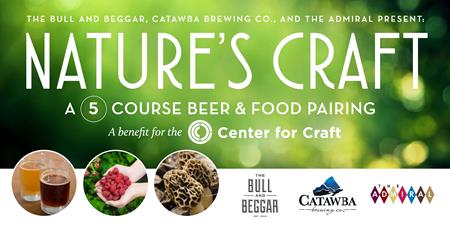 Ticket Price/Policy:
Tickets are $65 per person. Purchase in advance: