The intersection of North Carolina and Mexico is a place of questionable geography but undeniably inspired beer. First brewed for Cinco de Mayo at the Catawba Cantina, Carolina del Norte pays homage to the rich brewing tradition of our Southern Neighbor. Handcrafted with Vienna malt and German noble hops, this well-traveled cerveza is clean, crisp, and drinkable. ¡Salud!

This refreshing session cerveza celebrates the deep-rooted European influence on Mexico’s brewing history, when German-speaking immigrants migrated west following the Mexican War of Independence (1821). History buffs of 19th century Mexico will also note the Austrian Maximilian’s cultural influence, having served as the only monarch of the Second Mexican Empire.

Naturally, the first widely-produced beers from this time were similar to the popular Vienna Lager, the favored beer of Austria’s capital city. The style would later find a foothold in the U.S., as beer-deprived Americans did their part to help grow the Mexican beer industry during Prohibition Era.

Carolina del Norte takes inspiration from this rich brewing history of our Southern Neighbor – graphically depicted on the can’s label by a cardinal, the state bird of North Carolina, wearing a sombrero. Deep gold in color, it has big Vienna malt character and noble hop aroma from Hallertau Mittelfrüh German hops. True to style, it finishes clean, crisp, and well-balanced. Perhaps a bit lighter than its European counterpart and superbly drinkable, our Mexican Lager offers a subtle nod to the warm climates where it evolved. 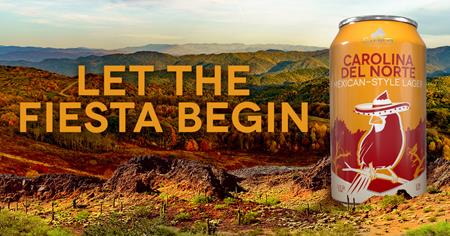