In the years since my brother and I began singing together, the definitions of both life and artistry have changed dramatically. There used to be a line separating the two — a division between the pursuit of music and what we recognized as our daily lives. Intrinsically, one would have to pause in order for the other to continue. When this line was visible, in order for us to write, perform, and chase a musically driven livelihood, we would depart from our lives as we knew them, often abruptly and with some difficulty. Alternately, when we were present for the events of which life is conventionally comprised (birthdays and weddings of family members, weekly grocery store trips, daytime jobs, etc.), music would have to wait. It would stop so we could maintain a familiar momentum — one wherein bills were paid, goals were met, hometown relationships were maintained, and the stability through being in one place was felt and appreciated.

Our lives were fine. Our music was okay. In retrospect, I understand the two were bound together — the nourishment of each eventually benefiting both, though at the time, it seemed as if neither could progress in the wake of the other.

That was over three thousand shows ago. Eight albums ago. Hundreds of thousands of miles ago. A million albums have been sold and twice as many shared or given away. There have been high and low profile performances, television appearances, international tours, alliances made and strengthened, songs written and rehearsed — called complete and revised again anyway. Over time, we watched the celebratory frenzy once experienced only in the bars and restaurants of our early years erupt through the grand audiences of arenas, festivals, and amphitheaters across the world. Our name, once an afterthought on a xeroxed restaurant calendar in Hoboken, now in lights on the marquee at Madison Square Garden.

Something else happened in the 16 years that passed. Though we left home a thousand times, life continued. We finished college. We kept and made new and dear friendships. Lessons were learned, forgotten, repeated. The concepts of marriage, as well as divorce, became realities. Babies were born. Homes were built. We saw loved ones fight cancer in seemingly every form imaginable. We saw this battle won and lost — souls victorious in either outcome. We allowed these concepts to take root in our lives, and when they would allow it, we wrote songs with and for them. The stage and the instrumentation grew, matching our relatively unhurried and sometimes clumsy growth as people. We set upon a purposeful path of revision, attempting to embrace the changes we saw in ourselves as well as our artistic endeavors. Somewhere along the way, the line between music and life faded. The change was imperceptible at first. Then, when we weren't paying attention, it evaporated altogether.

With the disappearance of this division, the songs have become increasingly reflective in their nature. It could be argued that this has always been the case with us; the songs are open, honest, and to some extent, autobiographically accurate. I know this to be true. Though it does occur to me now, that in some regard, before any professional success, we were perhaps paradoxically more self-aware. The songs would show mere versions of ourselves — the heartbroken introvert, the frantic worker, the forlorn traveler, the philosopher, the romantic, the loner — all somehow imbued with the meaningful sheepishness of a James Dean character. We used to hope and vie for that attention, that perceived personality, that coolness. It was a safer way of showing ourselves, honesty filtered through the colorful lens of young men hoping not only to entertain, but to present themselves in the most favorable light possible. I believe we have, in the course of our artistic wanderings, methodically taken this lens away, to the betterment of our songs, and to the conviction of our course. It is with this current focus and harmony between art and living that we pen our songs. And it is in this state of resolution we share our ninth full length studio album.

Scott and I lead different lives, but we are, as we have always been, fully invested in each other's story. Consequently, the variety in our authorship maintains a unity which otherwise would be unattainable. We write together and separately, but we are forever in fellowship through the music. Our ventures into narrative and poetry are always served best with the full support of each other — two sources, one voice. Every record we make is a testament to this, regardless of how it is executed or to what musical landscape it is released.

True Sadness is a patchwork quilt, both thematically and stylistically. Wherein a myriad of contrasting fabrics make perfect sense on the same plane, this album draws upon countless resources from its writers and performers. To further propel the expansive color and textural fields of the record, we are blessed to play and perform music with a group of musicians who possess not only great talent, but great interpretive ability. They are an extension of our family and their care for the work at hand (and the project at large) informs a dynamic musical contribution to any piece we proudly give our last name. Sonically, the album is as multidimensional as its makers. The same could be said of its long list of influences. So the quilt is sewn, in part, with the brightly colored threads of Queen, Sister Rosetta Tharpe, Jimmie Rodgers, Tom Petty, Nine Inch Nails, Gillian Welch, Aretha Franklin, Walt Disney, Pink Floyd, Kings of Convenience, calypso of the 1950s and country of the 1930s. Rock and roll is here, as always. There are moments of undeniable celebration and camaraderie, others of quiet and lonely exhalation. Throughout the album, we stitched together the boldest red and the calmest green, polka dots and stripes, the roughest denim and the smoothest velveteen. They came together because they are the best patterns we have and because each of us brought our own fabric to the quilting frame.

We made this record as people who have made records together before — with experienced hands, appreciative hearts, renewed focus, and the knowledge of our good fortune to make music once again.

On June 24th, we will share with the world this work, these songs, and a contemporary chapter of our lives. 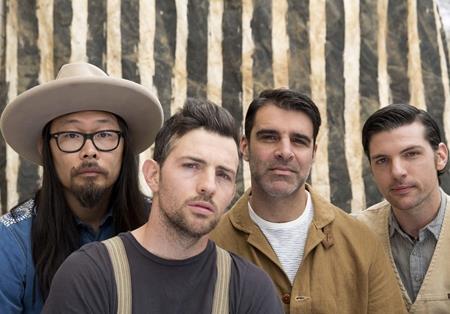