The seeds were sown for this collaboration beer in the fall of 2014, when Catawba Brewing Co-Owner Billy Pyatt had a chance encounter with John Washburn, Co-Founder of Bold Rock Hard Cider. John had traveled from Virginia to Asheville in advance of Bold Rock’s first North Carolina festival appearance, when he met Billy outside the iconic Barley’s Taproom. Billy’s brother, Scott Pyatt, another Co-Owner of Catawba’s family business, proceeded to give John and his wife, Robin, a tour of the city, introducing them to the local craft beverage scene. The owners became fast friends, with Pyatts and Washburns serving as loyal advocates for the other’s business.

The following year would see Catawba open their new Asheville South Slope brewery (April 2015), while Bold Rock opened their own Mills River location in November. Having evolved from cross-state friends to Western North Carolina neighbors, the owners began to discuss a collaboration brew. Both parties agreed the beer should be a vehicle for giving back to their local communities. As such, a portion of proceeds will be donated to the global Waterkeeper Alliance and local Riverkeeper organizations – including the French Broad Riverkeeper, a non-profit that protects the waterway connecting Asheville and Mills River, and the Catawba Riverkeeper, serving the Catawba River that runs between Catawba brewery locations in Morganton and Charlotte.

Riverkeeper Apple Sour Ale will be tapped at Bold Rock’s Mills River Tap Room and Catawba’s four tasting rooms on Friday, August 25. The release concludes the 2017 Riverkeeper Beer Series, which is also supported by five other Asheville-area breweries. French Broad Riverkeeper events will include clean-ups, float trips, and fundraisers at participating breweries. Catawba Brewing will organize additional clean-up efforts on the Catawba River. Each release party will be co-sponsored by a local outdoor gear manufacturer, who will donate prizes and apparel to be raffled off in support of the cause.

Inspired by a shared mission to protect the waterways that connect us, Catawba’s collaboration with Bold Rock Hard Cider gave life to this limited release – “crushed and crafted in the Blue Ridge Mountains™.” This elegantly rustic wheat beer is soured according to Old World methods, then fermented on green apples handpicked in Western North Carolina. Gently tart, light and refreshing, with a crisp cider-like finish – in a word, “crushable.” 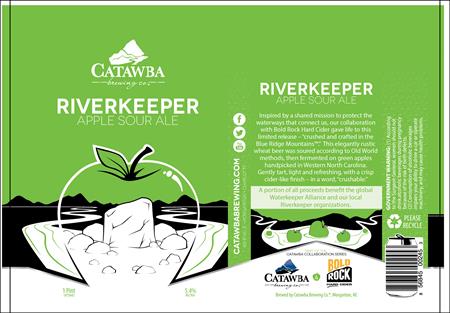