Brewery Science Theater 3000
Come get in touch with your inner nerd on at Clarkville this Saturday 6/3 at 6pm with Wyndridge Farm and Vault Brewing! Jason Stewart from Wyndridge and Jason Macais will be leading a beer flavor class (with free samples naturally) at West Philly Homebrew Outlet from 3:30-5pm. No reservations needed, just come on down! We will then be heading to Clarkville for a very special Philly Beer Week event kicking off at 6pm with special beers and ciders galore! The brewer from Vault and the cider maker from Wyndridge will be on hand to talk shop and answer any questions on rocket science, thermodynamics and astrophysics you may have. The mad scientists behind Clarkville and Wyndridge Farm Brewing have team up to create a cider inspired by their mutual admiration for Mystery Science Theater 3000. Its called "In The Not Too Disatnt Future" and its made with with 100% local apples grown in Adams and York county, PA and further aged on Saturn peaches, galaxy and comet hops for some intergalactic fantastic notes. This will only be available for a very short time on draft at Clarkville, Local 44 and Strangeloves. Growlers to go will be available at Clarkville for you to sip while contemplating the stars in West Philly. We will also be screening some classic MST3K episodes and Clarkvilles galaxy traveled chef Justin Bennett will be turning out some super special pies inspired by the show. Anyone with a costume or robot gets their first drink on Wyndridge (21+ of course). But wait! It gets even better! We will be pouring a firkin of Vault Philly Armada straight off the bar and pints will only be $3 while it lasts. Free Tshirt to whoever kicks the firkin! Full taplist below. Hopefully we will see you at Clarkville in the not too distant future (well, 6pm this Saturday to be exact)
Wyndridge Farm Brewing:
In The Not Too Distant Future Wyndridge/Clarkville collaboration cider
Mojito Cider
Mosaic Rye Ale
Merlot barrel aged watermelon sour ale (Brewery only)
Vault Brewing:
Philly Armada (firkin)
Mosaic Double IPA
Chinook Pale Ale
Kolsch 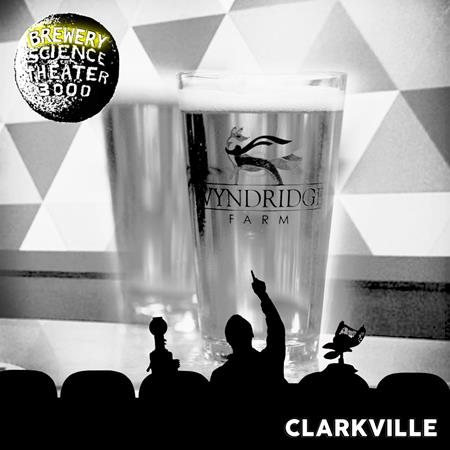