The ultimate craft beer block party, this 400-foot custom bar will be pouring beers from 60+ taps, including taps from guest breweries Rubicon Brewing Company, Fieldwork Brewing Company and Crispin Cider. 100% of proceeds from this event will go to charity. In Sacramento, Deschutes Brewery has teamed up for the second time with Runnin’ for Rhett, a non-profit foundation inspiring people to Move Into Life by nurturing a healthy community through fitness and nutrition.

This event will not only feature an enormous amount of beer, but Deschutes Brewery’s corporate executive chef, Jeff Usinowicz, is teaming up with local chefs including Chef Ryan Rose of Zocalo and Chef Wesley Nilssen of de Vere’s Irish Pub to create some dishes that complement the many beers being served.

Local, live music from some of the best regional bands will help to round out the festivities. A kid’s zone for families and a bike valet will also be on site. Look for a special souvenir from Oregon-based McKenzie SewOn, which will be on site creating live, one-off local prints for the event. 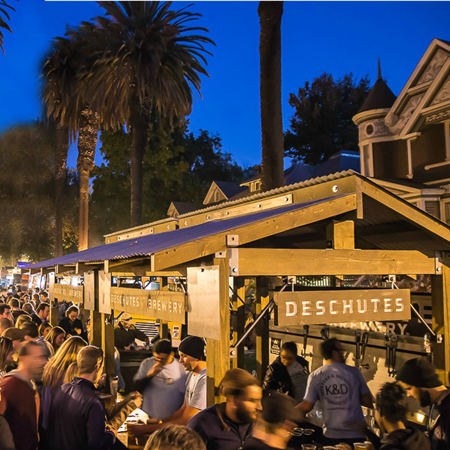 Ticket Price/Policy:
FREE Admission
Free for all ages. VIPS TICKETS AVAILABLE. Presented the Sacramento Handle District! Don’t miss out on your chance to pre-purchase your VIP tickets at https://www.deschutesbrewery.com/streetpub to get exclusive access to rare beer tastings led by one of our brewers. Our chef will also be serving up beer snacks like beer salami, beer nuts, hop corn and more in the VIP lounge.