It’s widely known that beer and barbecues go hand in hand, and in honor of its 15th Anniversary on the Coastside, the Brewing Company is taking this classic pairing to the next level, featuring a farm fresh local whole hog and vegetables prepared using house-made beer marinades. With plenty of house-brewed summer ales on hand to pair with the grilled offerings, guests will also enjoy summery sides like corn on the cob, seasonal grilled vegetables, grilled beer potatoes and pasta salad. Free tastes of the 15th Anniversary Imperial Red Double IPA, which was brewed with blood oranges, will be paired with a complementary dessert. The Brewing Company’s very own barbecue expert and executive head chef, Federico Godinez, will man the grill alongside Brewmaster James Costa, who will be on hand to discuss cooking with beer and pairing beer with barbecued foods. Throughout the afternoon guests are welcome to enjoy a complementary brewery tour and live music by local favorites Califuegos.

The 15th Anniversary Beerbecue takes place in the heated, dog-friendly Mavericks Beer Garden and admission is complementary. First come, first served, and reservations are not accepted. Menu specials will be a la carte in addition to the regular full menu. 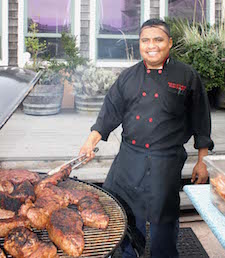